B is for Bella is available now!

Fans of Victoria Twead will know that in addition to her Old Fools series, she has embarked on a little fiction series set in leafy Dorset where she was raised. A is for Abigail was the first in the Sixpenny Cross series, and following its remarkable success, Ant Press is proud to announce that B is for Bella is now also available to purchase from Amazon.

Both A is for Abigail and B is for Bella on Amazon shot immediately to #1 Bestseller status in several Amazon categories as soon as they were published. 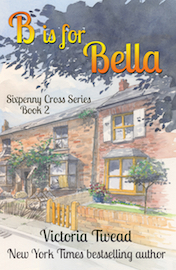 A short read by the New York Times bestselling author of the “Old Fools” series.

When two babies are born within weeks of each other in the village of Sixpenny Cross, one would expect the pair to become friends as they grow up.
But nothing could be further from the truth. While Bella Tait is destined to become an animal hoarder, Christine Dayton will follow a life of crime. Although their worlds may appear poles apart, their fates are dangerously entwined.

We wish Victoria luck with her new series and are delighted to announce that she is already working on the next Sixpenny Cross story: C is for the Captain.

Thank you Victoria for your speed and clarity in getting my book “out there” and for your willingness to help another Old Fool enter a new world.