Within the first hour of appearing on Amazon, Don’t Do It Like This: How NOT to move to Spain became a #1 New Release today. Ever dreamed of a new life in Spain? These three hilarious bestsellers might make you think again… 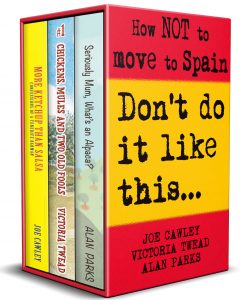 Award-winning author Joe Cawley suffered calamity after calamity when he took on a bar/restaurant in Tenerife.

Alan Parks decided that buying an off-grid olive mill and raising alpacas was a perfectly logical thing to do.

Did the authors’ businesses, relationships and sanity remain intact? Or did they give up and head for home?

If you like true life stories about chasing your dreams (however zany), or have ever thought about moving overseas, this funny travel memoirs boxset is just for you!

Grab it from Amazon while it’s on pre-order for a discounted price before it’s launched on June 6th.

“I truly wish I would have found Ant Press sooner. My experience working with this company has been nothing short of amazing. Not only are they the very best in the business – but what sets them apart is that they truly care. They are responsive, thorough, meticulous and detailed.”